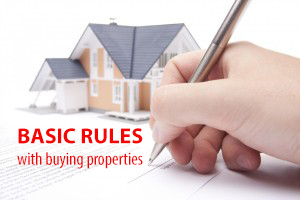 I have a few basic rules with buying properties that I’ve established over the years working at Real Estate Sales LLC.

Below  you can find the basic rules with buying properties

One of them being: If you wouldn’t let your wife and kids move into it without you….DON’T BUY IT! As you never know when you may end up living in it yourself. Long story for another post….lol. As with any rules, there’s times to break them and times to not and these rules aren’t for everyone. If I would have stuck to this rule I wouldn’t have had a commercial note called due on me and most likely wouldn’t have gone bankrupt.

I have a few theories behind this thought process… Appreciation is one of my strategies of my investing. I’m pretty particular on where I would want my family living and most likely where that would make sense is in an area where one can expect a steady appreciation. If I wouldn’t move my wife and kids in there…I don’t buy it. If it would attract my family, it’s likely to attract the same type of clients. Now before you go down the discrimination thought process, stop! I’m not saying that at all. I just find when I would live somewhere myself I put more pride into it and don’t mind spending a little bit more money to make it nice vs just what’s going to make me the quickest buck.

Obviously, the numbers have to make sense. Be careful when you’re looking at numbers that there is so much more then it making sense on paper. Use common sense too. Cashflow is awesome and unless it’s paid off don’t count on it. What I mean by this is build your buffer. You know “Murphy” he’ll come knocking at the worst possible time. If I would have taken my cash flow and built a 12 month buffer I would have never gotten myself in a bad position. I’ve seen more people go broke buying investment properties and almost every time it’s because they didn’t have enough put away for surprise expenses.

Lastly, as one of my mentors Dave Ramsey would say….”Broke people shouldn’t be buying properties” If you don’t have 6 months cash of your own personal expenses saved up…DON’T buy an investment property you’re BROKE!

I am waiting you with more interesting blog posts on my blog at RealEstateSalesLLC.com